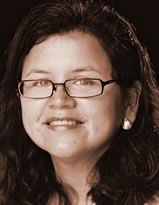 Chief Leah George-Wilson is a member of the Tsleil-Waututh First Nation (TWFN) located in North Vancouver. She was elected to a third term as Chief of TWN in May 2019. In 2001 she was the first woman to hold the office of Elected Chief for the TWFN, a position she held from 2001-2003 and 2005 – 2009.

Ms. George-Wilson previously worked for the TWFN for many years in various positions including member of the TWFN’s negotiating team in the BC Treaty Process, TWFN Self-Government Coordinator. and Director of the TWFN Treaty, Land and Resources Department.

She also sits on a number of boards including: the First Nations Lands Advisory Board, the Canadian Tourism Commission and the BC First Nations Health Council.