is comprised of a majority of First Nations and Tribal Councils in British Columbia and provides a forum for First Nations in BC to address issues related to Treaty negotiations as well as other issues of common concern. 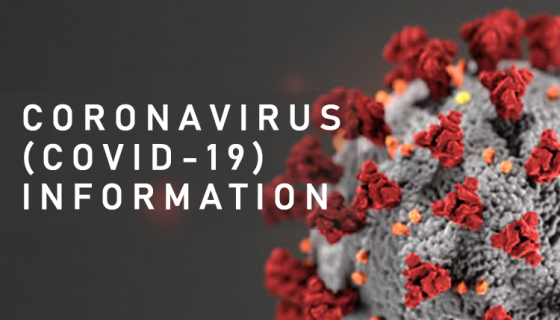 Impacts of COVID-19 for First Nations

Please visit First Nations Health Authority for daily updates on COVID-19 and impacts for First Nations. Find additional information from BC Ministry of Health and BC Centre for Disease Control... 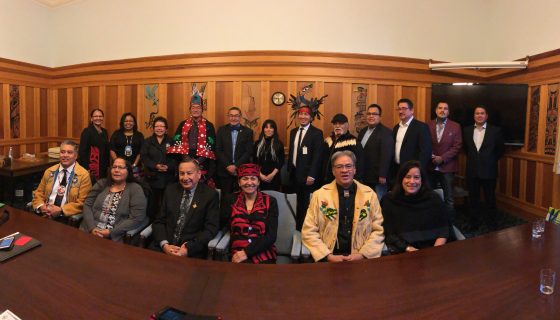 BC Rights of Indigenous Peoples Act

Legislation introduced Oct. 24, 2019 creates a path forward to recognize and uphold the human rights of Indigenous peoples in B.C. BILL 41 (2019) – DECLARATION ON THE RIGHTS OF... 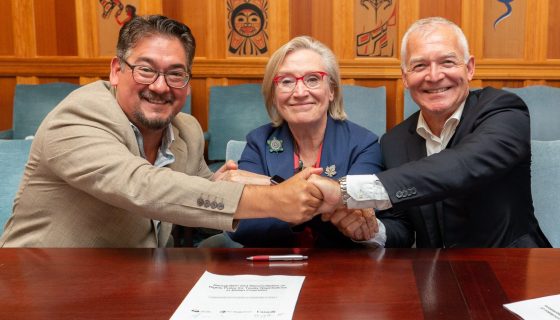 We are pleased to announce that the Recognition and Reconciliation of Rights Policy for Treaty Negotiations in British Columbia (the “Policy”) has been approved by Canada, British Columbia and the... 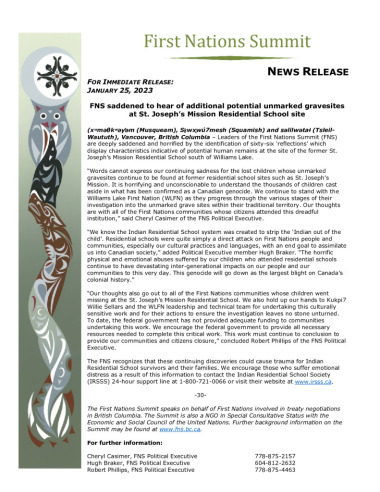 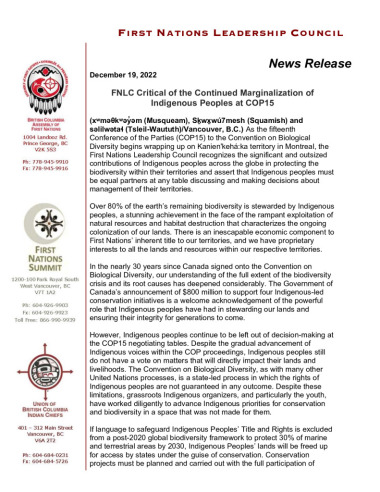 FNLC Critical of the Continued Marginalization of Indigenous Peoples at COP15 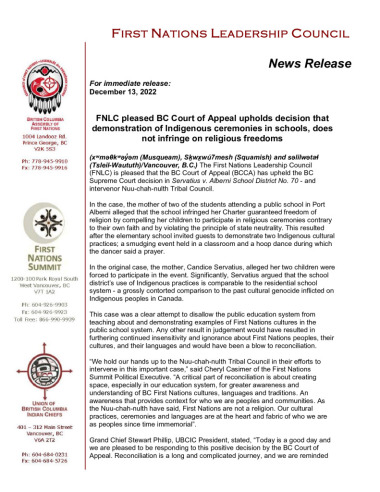 FNLC pleased BC Court of Appeal upholds decision that demonstration of Indigenous ceremonies in schools, does not infringe on religious freedoms

In depth analysis and discussion of recent issues and news worthy activities of interest to First Nations in BC, Canada and Internationally.

An International Year is an important cooperation mechanism dedicated to raising awareness of a particular topic or theme of global interest or concern, and mobilizing different players for coordinated action around the world.

In 2016, the United Nations General Assembly adopted a resolution proclaiming 2019 as the International Year of Indigenous Languages, based on a recommendation by the Permanent Forum on Indigenous Issues.

At the time, the Forum said that 40 per cent of the estimated 6,700 languages spoken around the world were in danger of disappearing.  The fact that most of these are indigenous languages puts the cultures and knowledge systems to which they belong at risk.

In addition, indigenous peoples are often isolated both politically and socially in the countries they live in, by the geographical location of their communities, their separate histories, cultures, languages and traditions.

And yet, they are not only leaders in protecting the environment, but their languages represent complex systems of knowledge and communication and should be recognized as a strategic national resource for development, peace building and reconciliation.

They also foster and promote unique local cultures, customs and values which have endured for thousands of years. Indigenous languages add to the rich tapestry of global cultural diversity. Without them, the world would be a poorer place.

Celebrating IYIL2019 will help promote and protect indigenous languages and improve the lives of those who speak them.  It will contribute to achieving the objectives set out in the United Nations Declaration on the Rights of Indigenous Peoples and the 2030 Agenda on Sustainable Development.

The celebration is also expected to strengthen and reinforce the many standard-setting tools adopted by the international community which include specific provisions to promote and protect languages.

June 12, Coast Salish Territory, Vancouver, British Columbia –Leaders of the First Nations Summit (FNS) are congratulating National Chief Perry Bellegarde and the Assembly of First Nations for their efforts to secure and sign a Memorandum of Understanding (MOU) on shared priorities with Prime Minister Justin Trudeau.

The Assembly of First Nations – Canada Memorandum of Understanding on Joint Priorities, signed this morning at an AFN-Crown meeting, commits to regular, ongoing engagement between First Nations and the Government of Canada to ensure progress on priorities identified by First Nations. A copy of the MOU can be viewed at www.afn.ca.

Download the FNS Submission, “a proactive First Nations Summit plan for the Crown to meet its constitutional obligations with respect to Aboriginal and treaty rights” [pdf, 91 pages]

United Nations Declaration on the Rights of Indigenous Peoples 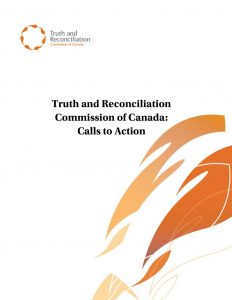 Events, meetings and other activities of interest to First Nations in BC. 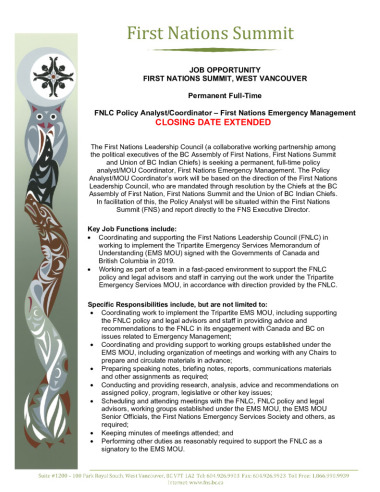 The First Nations Leadership Council (a collaborative working partnership among the political executives of the... 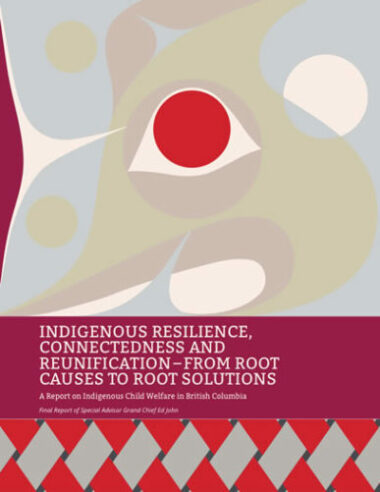 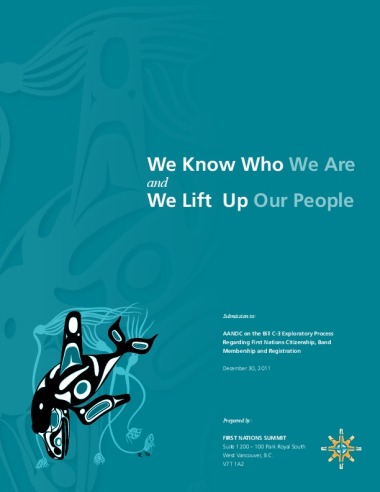 We Know Who We Are and We Lift Up Our People

This report has been prepared as part of the First Nations Summit’s participation in Aboriginal... 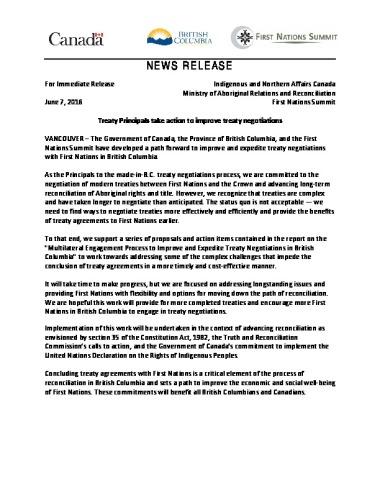 The Government of Canada, the Province of British Columbia, and the First Nations Summit have... 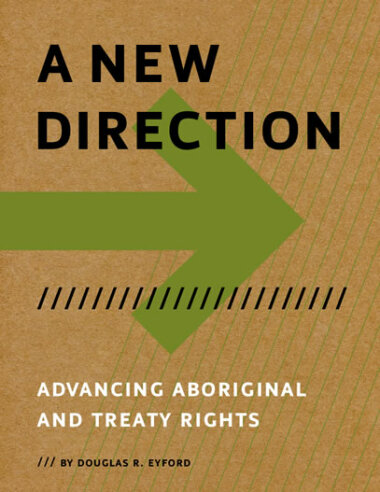 Throughout present-day Canada, the Crown entered into treaties with Aboriginal peoples1 who surrendered their claims... 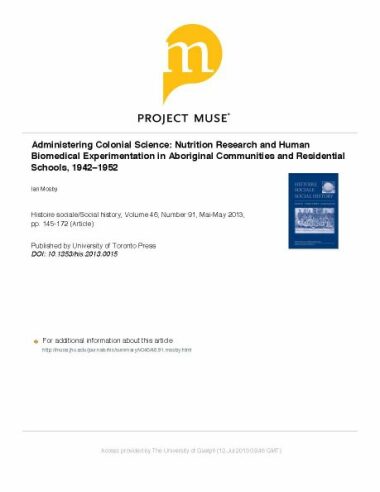 Between 1942 and 1952, some of Canada’s leading nutrition experts, in cooperation with various federal...