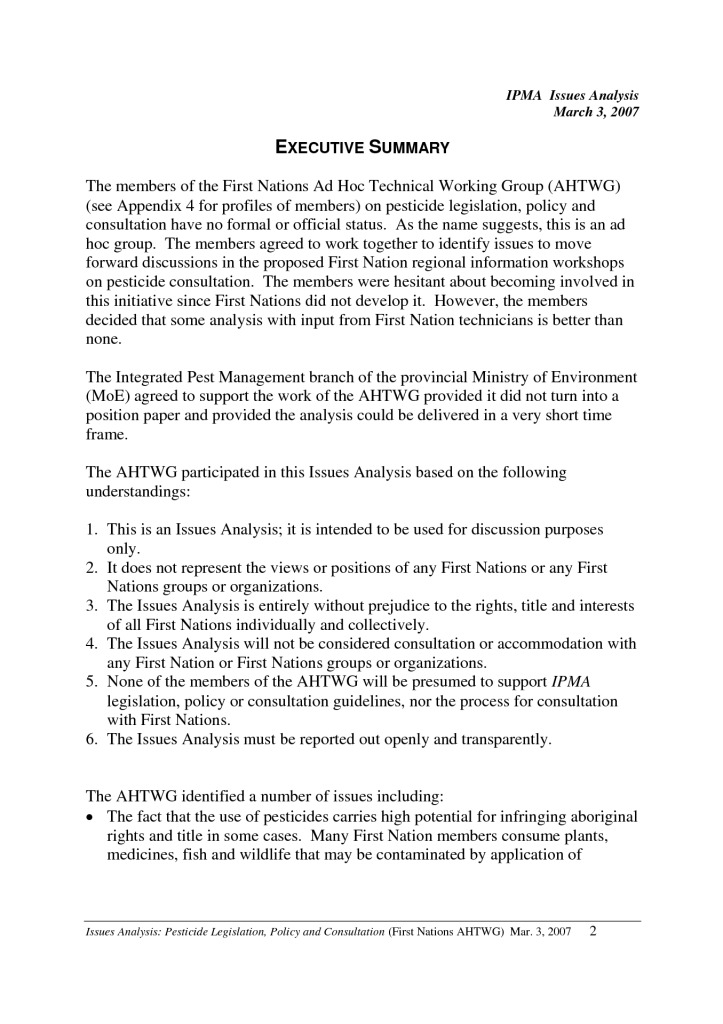 The members of the First Nations Ad Hoc Technical Working Group (AHTWG) (see Appendix 4 for profiles of members) on pesticide legislation, policy and consultation have no formal or official status. As the name suggests, this is an ad hoc group. The members agreed to work together to identify issues to move forward discussions in the proposed First Nation regional information workshops on pesticide consultation. The members were hesitant about becoming involved in this initiative since First Nations did not develop it. However, the members decided that some analysis with input from First Nation technicians is better than none.

The Integrated Pest Management branch of the provincial Ministry of Environment (MoE) agreed to support the work of the AHTWG provided it did not turn into a position paper and provided the analysis could be delivered in a very short time frame.

The AHTWG participated in this Issues Analysis based on the following understandings:

The AHTWG identified a number of issues including:
 The fact that the use of pesticides carries high potential for infringing aboriginal

rights and title in some cases. Many First Nation members consume plants, medicines, fish and wildlife that may be contaminated by application of

pesticides. Consultation should be at the high end of the spectrum where such

#4: MoE undertake to identify where and when the WCEL submission were effective in making changes to the IPMA

#5: Through the Regional Information Workshops, if there is First Nation concern expressed related to the Act and its consultation, the AHTWG recommends government consult and review the Act with First Nations.

#6: That technical issues be further identified and a workable plan developed to address the issues raised through the Regional Information Workshops.

#7: At the design workshop one of the recommendations was that there be a continuation of information flow, work from one workshop relayed to the next.

#8: Identify the role for ongoing AHTWG involvement. However ensure the Ad Hoc members are identified in an open and transparent process by First Nations.

#9: MoE to initiate an industry/FN workshop to discuss issues.

#10: For each regional information workshop, it would be useful to have a trend analysis of the pesticide use by the categories used under the Pest Control Act so that exempted pesticides under this Act are not lost in the analysis. This would help indicate whether or there has been a reduction of pesticide use and an increase of Integrated Pesticide Management techniques.

#11: Jointly (FN new AHTWG/MoE) conduct a review of the excluded pesticides with other jurisdictions.