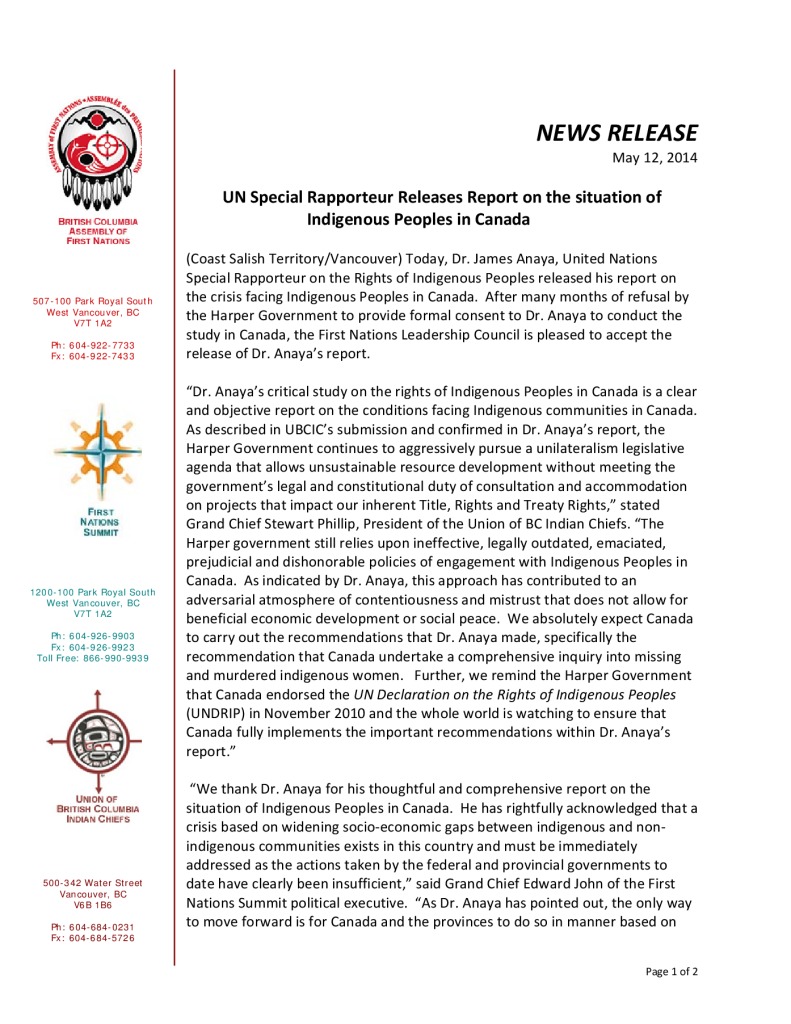 UN Releases Report on the situation of Indigenous Peoples in Canada

(Coast Salish Territory/Vancouver) Today, Dr. James Anaya, United Nations Special Rapporteur on the Rights of Indigenous Peoples released his report on the crisis facing Indigenous Peoples in Canada. After many months of refusal by the Harper Government to provide formal consent to Dr. Anaya to conduct the study in Canada, the First Nations Leadership Council is pleased to accept the release of Dr. Anaya’s report.

Dr. Anaya’s critical study on the rights of Indigenous Peoples in Canada is a clear and objective report on the conditions facing Indigenous communities in Canada. As described in UBCIC’s submission and confirmed in Dr. Anaya’s report, the Harper Government continues to aggressively pursue a unilateralism legislative agenda that allows unsustainable resource development without meeting the government’s legal and constitutional duty of consultation and accommodation on projects that impact our inherent Title, Rights and Treaty Rights,” stated Grand Chief Stewart Phillip, President of the Union of BC Indian Chiefs. “The Harper government still relies upon ineffective, legally outdated, emaciated, prejudicial and dishonorable policies of engagement with Indigenous Peoples in Canada. As indicated by Dr. Anaya, this approach has contributed to an adversarial atmosphere of contentiousness and mistrust that does not allow for beneficial economic development or social peace. We absolutely expect Canada to carry out the recommendations that Dr. Anaya made, specifically the recommendation that Canada undertake a comprehensive inquiry into missing and murdered indigenous women. Further, we remind the Harper Government that Canada endorsed the UN Declaration on the Rights of Indigenous Peoples (UNDRIP) in November 2010 and the whole world is watching to ensure that Canada fully implements the important recommendations within Dr. Anaya’s report.”