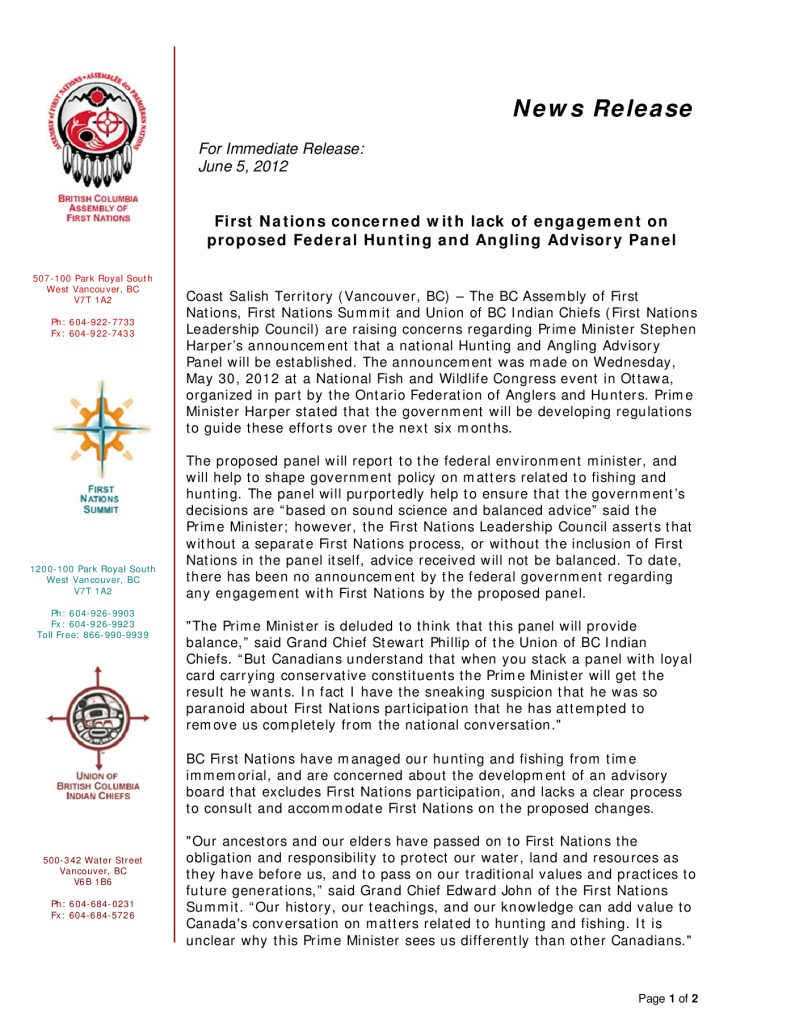 Coast Salish Territory (Vancouver, BC) – The BC Assembly of First Nations, First Nations Summit and Union of BC Indian Chiefs (First Nations Leadership Council) are raising concerns regarding Prime Minister Stephen Harper’s announcement that a national Hunting and Angling Advisory Panel will be established. The announcement was made on Wednesday, May 30, 2012 at a National Fish and Wildlife Congress event in Ottawa, organized in part by the Ontario Federation of Anglers and Hunters. Prime Minister Harper stated that the government will be developing regulations to guide these efforts over the next six months.

The proposed panel will report to the federal environment minister, and will help to shape government policy on matters related to fishing and hunting. The panel will purportedly help to ensure that the government’s decisions are “based on sound science and balanced advice” said the Prime Minister; however, the First Nations Leadership Council asserts that without a separate First Nations process, or without the inclusion of First Nations in the panel itself, advice received will not be balanced. To date, there has been no announcement by the federal government regarding any engagement with First Nations by the proposed panel.

“The Prime Minister is deluded to think that this panel will provide balance,” said Grand Chief Stewart Phillip of the Union of BC Indian Chiefs. “But Canadians understand that when you stack a panel with loyal card carrying conservative constituents the Prime Minister will get the result he wants. In fact I have the sneaking suspicion that he was so paranoid about First Nations participation that he has attempted to remove us completely from the national conversation.”