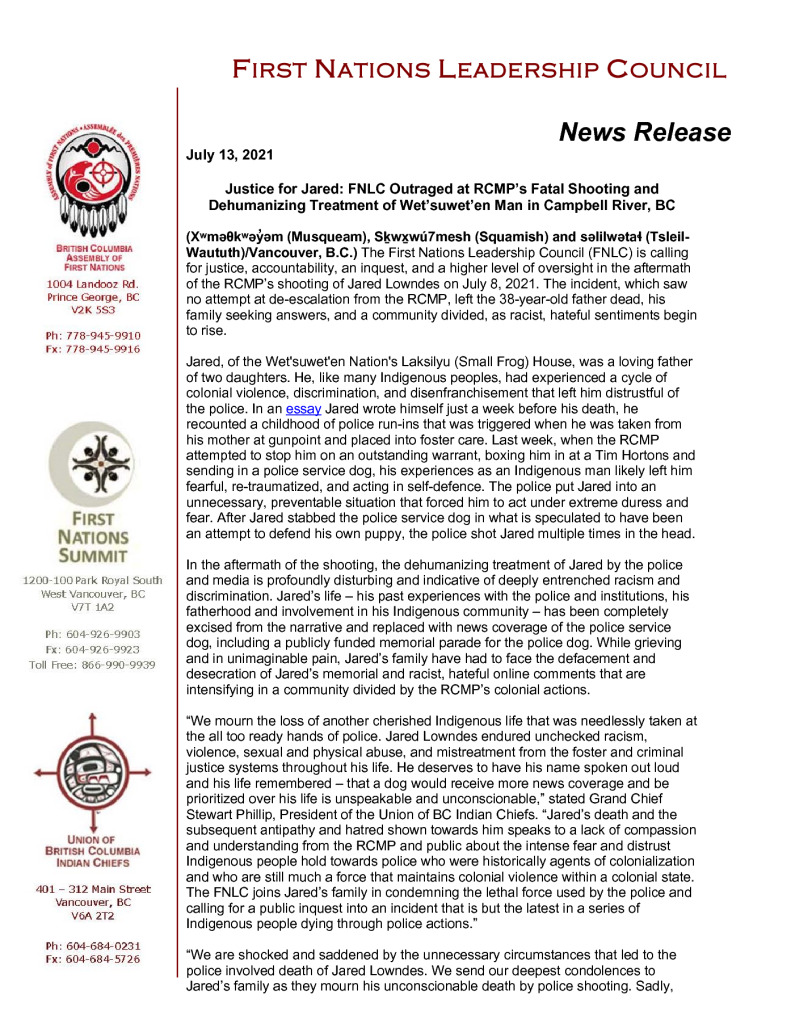 Justice for Jared: FNLC Outraged at RCMP’s Fatal Shooting and Dehumanizing Treatment of Wet’suwet’en Man in Campbell River, BC

(Xʷməθkʷəy̓əm (Musqueam), Sḵwx̱wú7mesh (Squamish) and səlilwətaɬ (Tsleil-Waututh)/Vancouver, B.C.) The First Nations Leadership Council (FNLC) is calling for justice, accountability, an inquest, and a higher level of oversight in the aftermath of the RCMP’s shooting of Jared Lowndes on July 8, 2021. The incident, which saw no attempt at de-escalation from the RCMP, left the 38-year-old father dead, his family seeking answers, and a community divided, as racist, hateful sentiments begin to rise.

Jared, of the Wet’suwet’en Nation’s Laksilyu (Small Frog) House, was a loving father of two daughters. He, like many Indigenous peoples, had experienced a cycle of colonial violence, discrimination, and disenfranchisement that left him distrustful of the police. In an essay Jared wrote himself just a week before his death, he recounted a childhood of police run-ins that was triggered when he was taken from his mother at gunpoint and placed into foster care. Last week, when the RCMP attempted to stop him on an outstanding warrant, boxing him in at a Tim Hortons and sending in a police service dog, his experiences as an Indigenous man likely left him fearful, re-traumatized, and acting in self-defence. The police put Jared into an unnecessary, preventable situation that forced him to act under extreme duress and fear. After Jared stabbed the police service dog in what is speculated to have been an attempt to defend his own puppy, the police shot Jared multiple times in the head