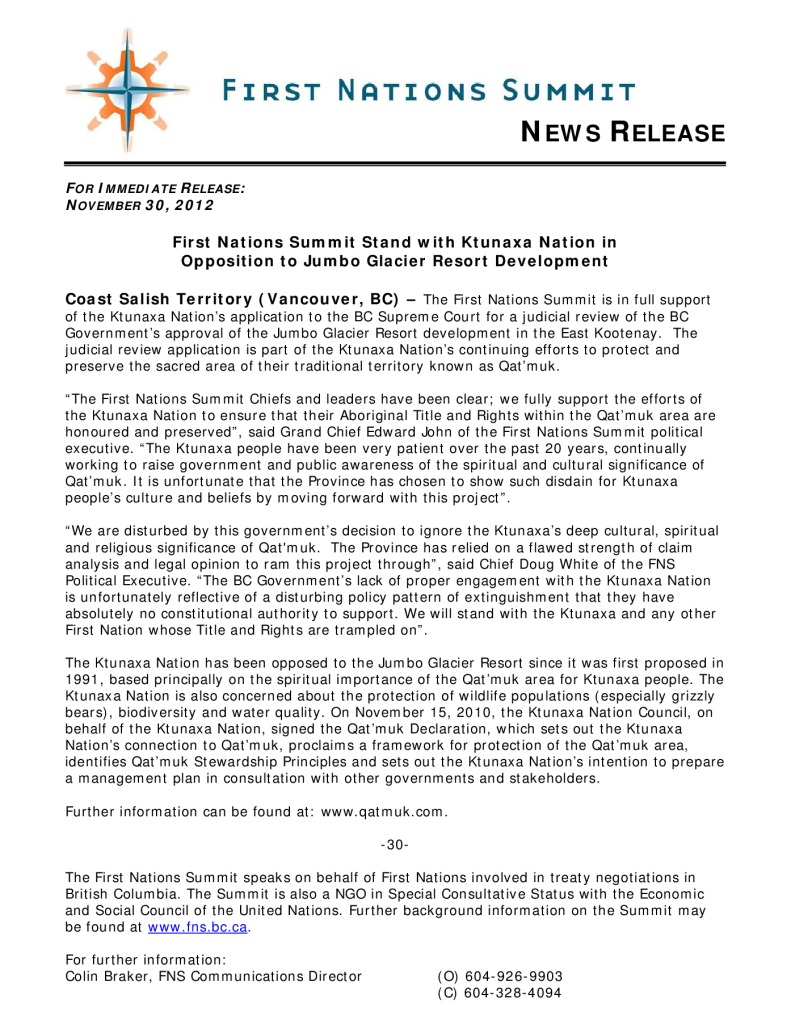 Coast Salish Territory (Vancouver, BC) – The First Nations Summit is in full support of the Ktunaxa Nation’s application to the BC Supreme Court for a judicial review of the BC Government’s approval of the Jumbo Glacier Resort development in the East Kootenay. The judicial review application is part of the Ktunaxa Nation’s continuing efforts to protect and preserve the sacred area of their traditional territory known as Qat’muk.

“The First Nations Summit Chiefs and leaders have been clear; we fully support the efforts of the Ktunaxa Nation to ensure that their Aboriginal Title and Rights within the Qat’muk area are honoured and preserved”, said Grand Chief Edward John of the First Nations Summit political executive. “The Ktunaxa people have been very patient over the past 20 years, continually working to raise government and public awareness of the spiritual and cultural significance of Qat’muk. It is unfortunate that the Province has chosen to show such disdain for Ktunaxa people’s culture and beliefs by moving forward with this project”.

“We are disturbed by this government’s decision to ignore the Ktunaxa’s deep cultural, spiritual and religious significance of Qat’muk. The Province has relied on a flawed strength of claim analysis and legal opinion to ram this project through”, said Chief Doug White of the FNS Political Executive. “The BC Government’s lack of proper engagement with the Ktunaxa Nation is unfortunately reflective of a disturbing policy pattern of extinguishment that they have absolutely no constitutional authority to support. We will stand with the Ktunaxa and any other First Nation whose Title and Rights are trampled on”.