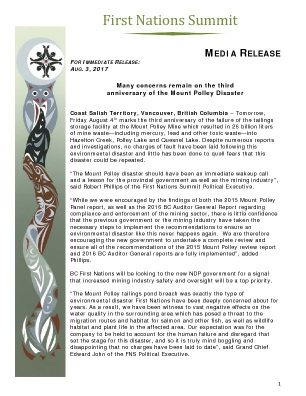 Coast Salish Territory, Vancouver, British Columbia – Tomorrow, Friday August 4th marks the third anniversary of the failure of the tailings storage facility at the Mount Polley Mine which resulted in 26 billion liters of mine waste—including mercury, lead and other toxic waste—into Hazelton Creek, Polley Lake and Quesnel Lake. Despite numerous reports and investigations, no charges of fault have been laid following this environmental disaster and little has been done to quell fears that this disaster could be repeated.