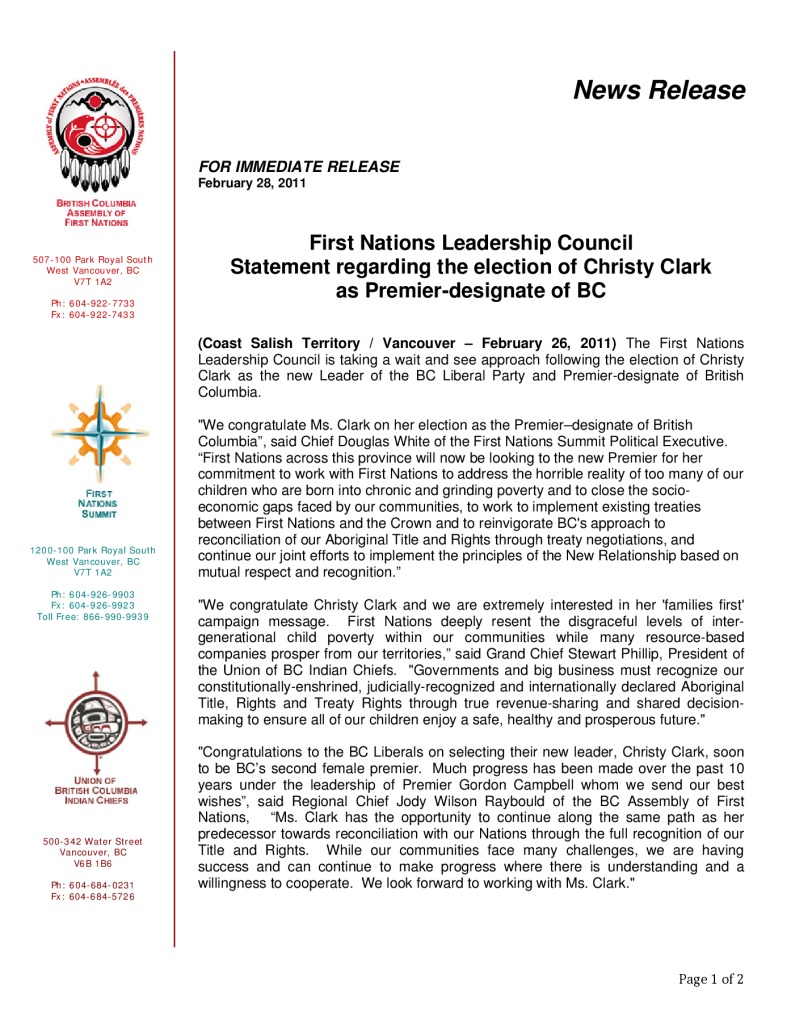 (Coast Salish Territory / Vancouver – February 26, 2011) The First Nations Leadership Council is taking a wait and see approach following the election of Christy Clark as the new Leader of the BC Liberal Party and Premier-designate of British Columbia.

“We congratulate Ms. Clark on her election as the Premier–designate of British Columbia”, said Chief Douglas White of the First Nations Summit Political Executive. “First Nations across this province will now be looking to the new Premier for her commitment to work with First Nations to address the horrible reality of too many of our children who are born into chronic and grinding poverty and to close the socio- economic gaps faced by our communities, to work to implement existing treaties between First Nations and the Crown and to reinvigorate BC’s approach to reconciliation of our Aboriginal Title and Rights through treaty negotiations, and continue our joint efforts to implement the principles of the New Relationship based on mutual respect and recognition.”

“We congratulate Christy Clark and we are extremely interested in her ‘families first’ campaign message. First Nations deeply resent the disgraceful levels of inter- generational child poverty within our communities while many resource-based companies prosper from our territories,” said Grand Chief Stewart Phillip, President of the Union of BC Indian Chiefs. “Governments and big business must recognize our constitutionally-enshrined, judicially-recognized and internationally declared Aboriginal Title, Rights and Treaty Rights through true revenue-sharing and shared decision- making to ensure all of our children enjoy a safe, healthy and prosperous future.”