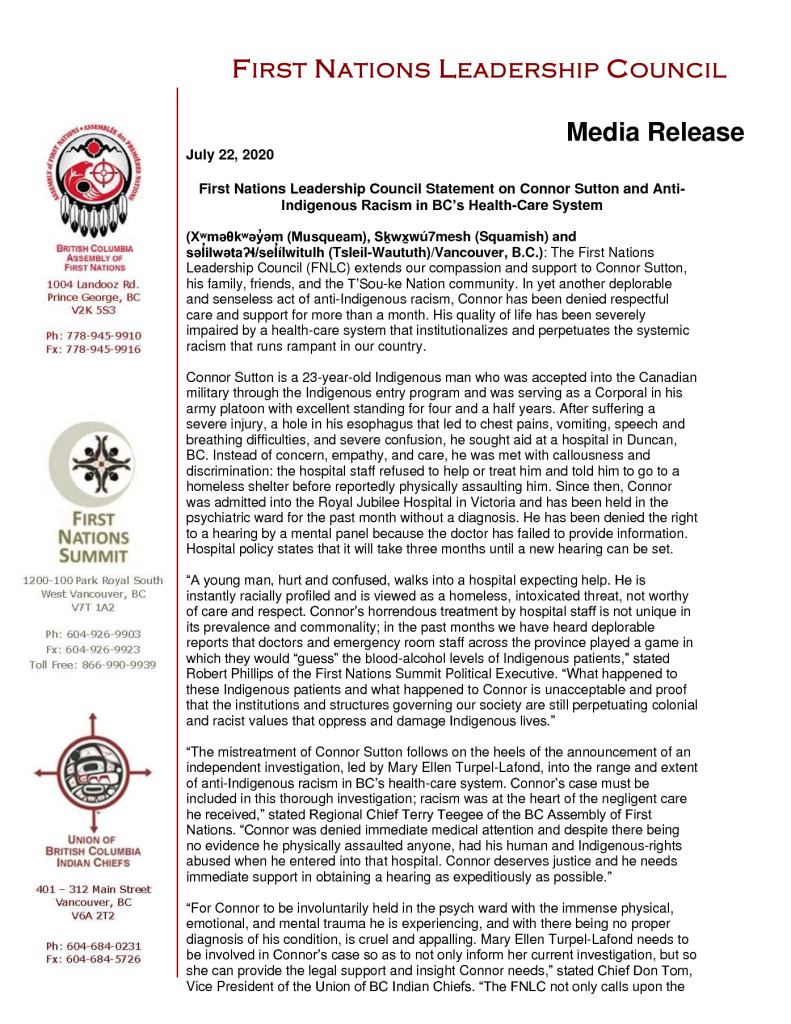 (Xʷməθkʷəy̓əm (Musqueam), Sḵwx̱wú7mesh (Squamish) and səl̓ilwətaʔɬ/sel̓ílwitulh (Tsleil-Waututh)/Vancouver, B.C.): The First Nations Leadership Council (FNLC) extends our compassion and support to Connor Sutton, his family, friends, and the T’Sou-ke Nation community. In yet another deplorable and senseless act of anti-Indigenous racism, Connor has been denied respectful care and support for more than a month. His quality of life has been severely impaired by a health-care system that institutionalizes and perpetuates the systemic racism that runs rampant in our country.

Connor Sutton is a 23-year-old Indigenous man who was accepted into the Canadian military through the Indigenous entry program and was serving as a Corporal in his army platoon with excellent standing for four and a half years. After suffering a severe injury, a hole in his esophagus that led to chest pains, vomiting, speech and breathing difficulties, and severe confusion, he sought aid at a hospital in Duncan, BC. Instead of concern, empathy, and care, he was met with callousness and discrimination: the hospital staff refused to help or treat him and told him to go to a homeless shelter before reportedly physically assaulting him. Since then, Connor was admitted into the Royal Jubilee Hospital in Victoria and has been held in the psychiatric ward for the past month without a diagnosis. He has been denied the right to a hearing by a mental panel because the doctor has failed to provide information. Hospital policy states that it will take three months until a new hearing can be set.