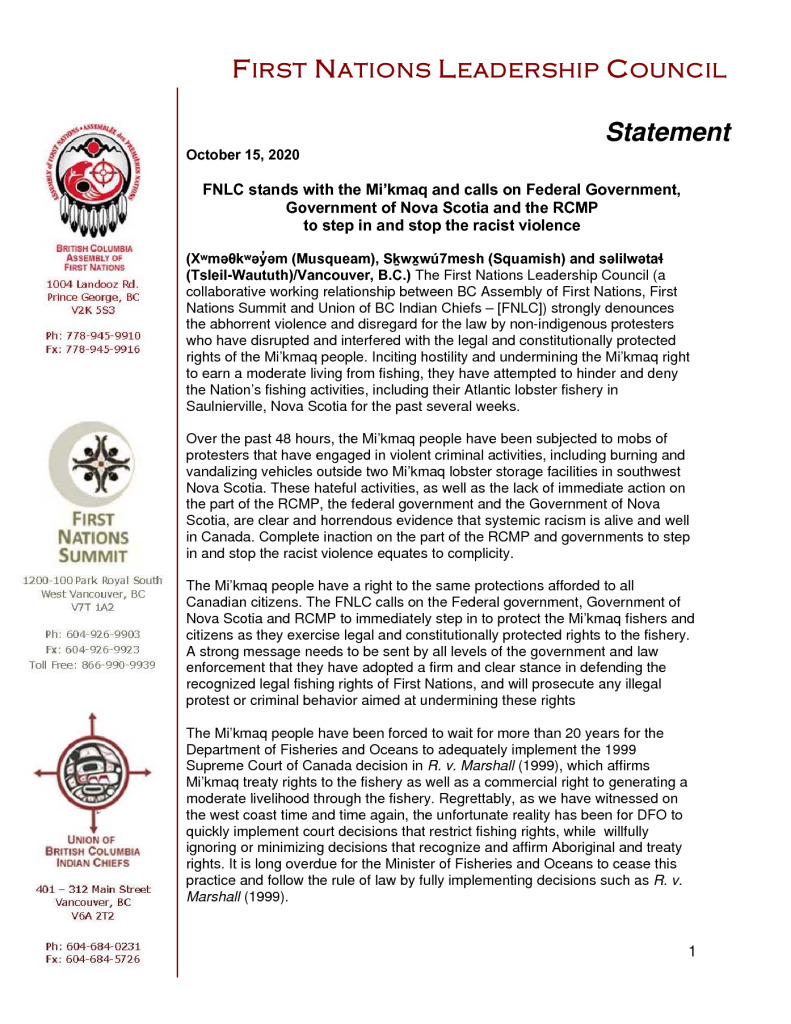 FNLC stands with the Mi’kmaq and calls on Federal Government, Government of Nova Scotia and the RCMP to step in and stop the racist violence

(Xʷməθkʷəy̓əm (Musqueam), Sḵwx̱wú7mesh (Squamish) and səlilwətaɬ (Tsleil-Waututh)/Vancouver, B.C.) The First Nations Leadership Council (a collaborative working relationship between BC Assembly of First Nations, First Nations Summit and Union of BC Indian Chiefs – [FNLC]) strongly denounces the abhorrent violence and disregard for the law by non-indigenous protesters who have disrupted and interfered with the legal and constitutionally protected rights of the Mi’kmaq people. Inciting hostility and undermining the Mi’kmaq right to earn a moderate living from fishing, they have attempted to hinder and deny the Nation’s fishing activities, including their Atlantic lobster fishery in Saulnierville, Nova Scotia for the past several weeks.

Over the past 48 hours, the Mi’kmaq people have been subjected to mobs of protesters that have engaged in violent criminal activities, including burning and vandalizing vehicles outside two Mi’kmaq lobster storage facilities in southwest Nova Scotia. These hateful activities, as well as the lack of immediate action on the part of the RCMP, the federal government and the Government of Nova Scotia, are clear and horrendous evidence that systemic racism is alive and well in Canada. Complete inaction on the part of the RCMP and governments to step in and stop the racist violence equates to complicity.