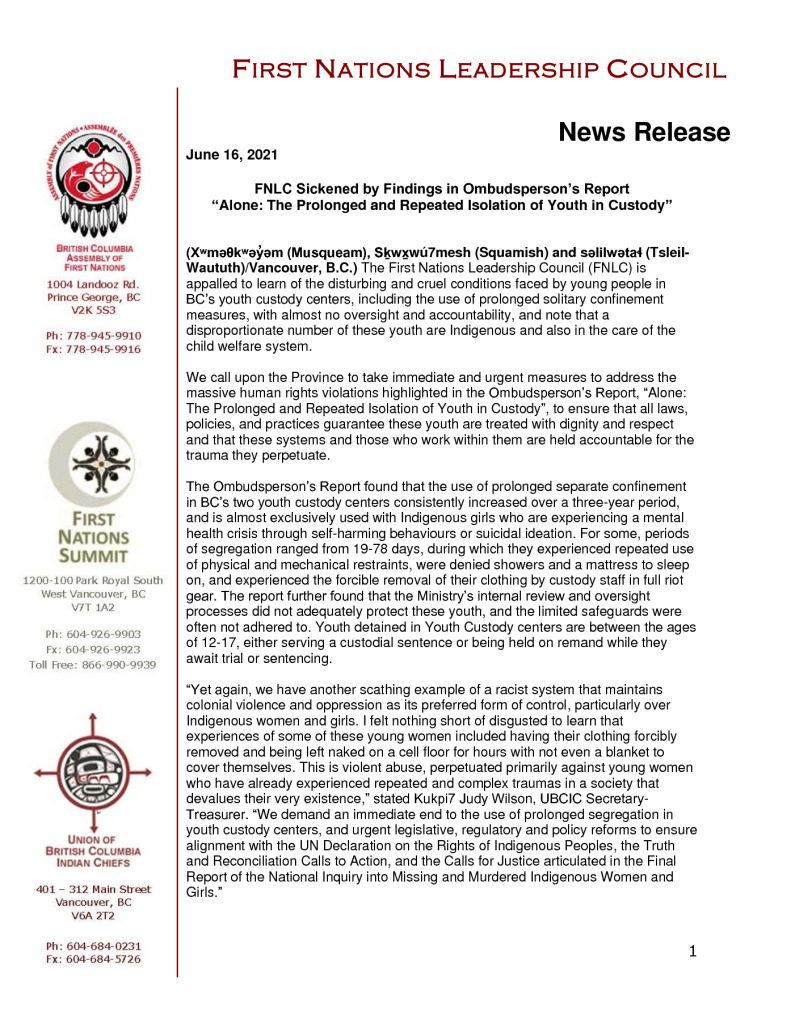 FNLC Sickened by Findings in Ombudsperson’s Report “Alone: The Prolonged and Repeated Isolation of Youth in Custody”

(Xʷməθkʷəy̓əm (Musqueam), Sḵwx̱wú7mesh (Squamish) and səlilwətaɬ (Tsleil-Waututh)/Vancouver, B.C.) The First Nations Leadership Council (FNLC) is appalled to learn of the disturbing and cruel conditions faced by young people in BC’s youth custody centers, including the use of prolonged solitary confinement measures, with almost no oversight and accountability, and note that a disproportionate number of these youth are Indigenous and also in the care of the child welfare system.

We call upon the Province to take immediate and urgent measures to address the massive human rights violations highlighted in the Ombudsperson’s Report, “Alone: The Prolonged and Repeated Isolation of Youth in Custody”, to ensure that all laws, policies, and practices guarantee these youth are treated with dignity and respect and that these systems and those who work within them are held accountable for the trauma they perpetuate.

The Ombudsperson’s Report found that the use of prolonged separate confinement in BC’s two youth custody centers consistently increased over a three-year period, and is almost exclusively used with Indigenous girls who are experiencing a mental health crisis through self-harming behaviours or suicidal ideation. For some, periods of segregation ranged from 19-78 days, during which they experienced repeated use of physical and mechanical restraints, were denied showers and a mattress to sleep on, and experienced the forcible removal of their clothing by custody staff in full riot gear. The report further found that the Ministry’s internal review and oversight processes did not adequately protect these youth, and the limited safeguards were often not adhered to. Youth detained in Youth Custody centers are between the ages of 12-17, either serving a custodial sentence or being held on remand while they await trial or sentencing.