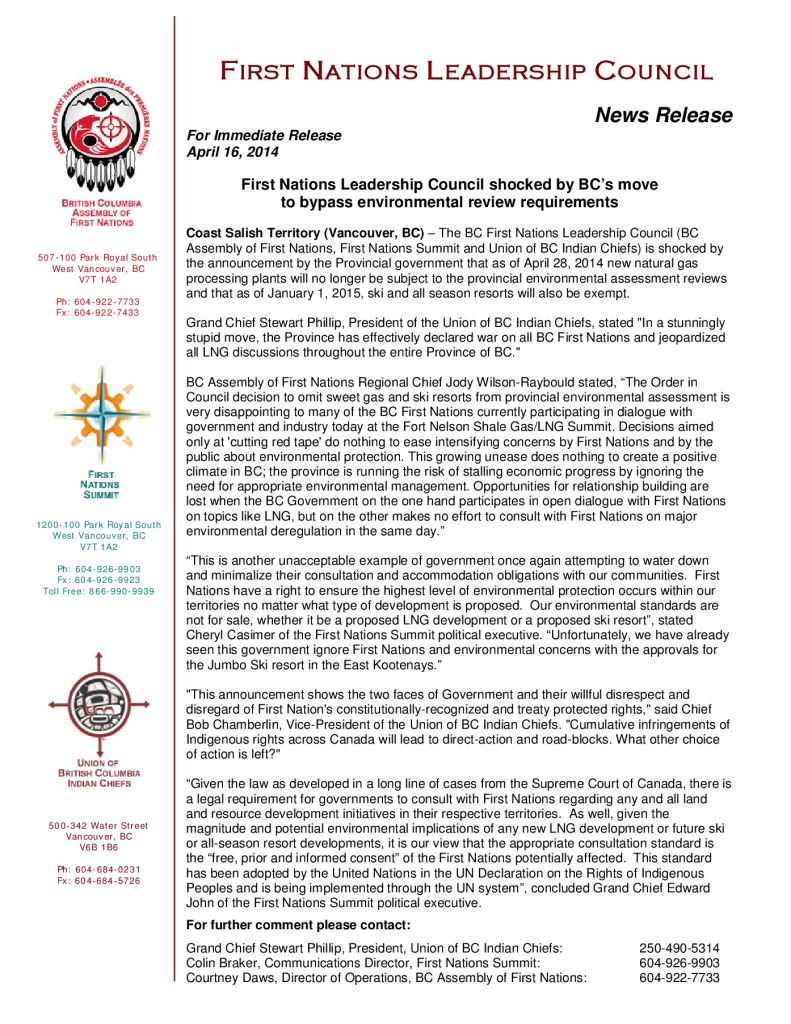 Coast Salish Territory (Vancouver, BC) – The BC First Nations Leadership Council (BC Assembly of First Nations, First Nations Summit and Union of BC Indian Chiefs) is shocked by the announcement by the Provincial government that as of April 28, 2014 new natural gas processing plants will no longer be subject to the provincial environmental assessment reviews and that as of January 1, 2015, ski and all season resorts will also be exempt.

Grand Chief Stewart Phillip, President of the Union of BC Indian Chiefs, stated “In a stunningly stupid move, the Province has effectively declared war on all BC First Nations and jeopardized all LNG discussions throughout the entire Province of BC.”

BC Assembly of First Nations Regional Chief Jody Wilson-Raybould stated, “The Order in Council decision to omit sweet gas and ski resorts from provincial environmental assessment is very disappointing to many of the BC First Nations currently participating in dialogue with government and industry today at the Fort Nelson Shale Gas/LNG Summit. Decisions aimed only at ‘cutting red tape’ do nothing to ease intensifying concerns by First Nations and by the public about environmental protection. This growing unease does nothing to create a positive climate in BC; the province is running the risk of stalling economic progress by ignoring the need for appropriate environmental management. Opportunities for relationship building are lost when the BC Government on the one hand participates in open dialogue with First Nations on topics like LNG, but on the other makes no effort to consult with First Nations on major environmental deregulation in the same day.”