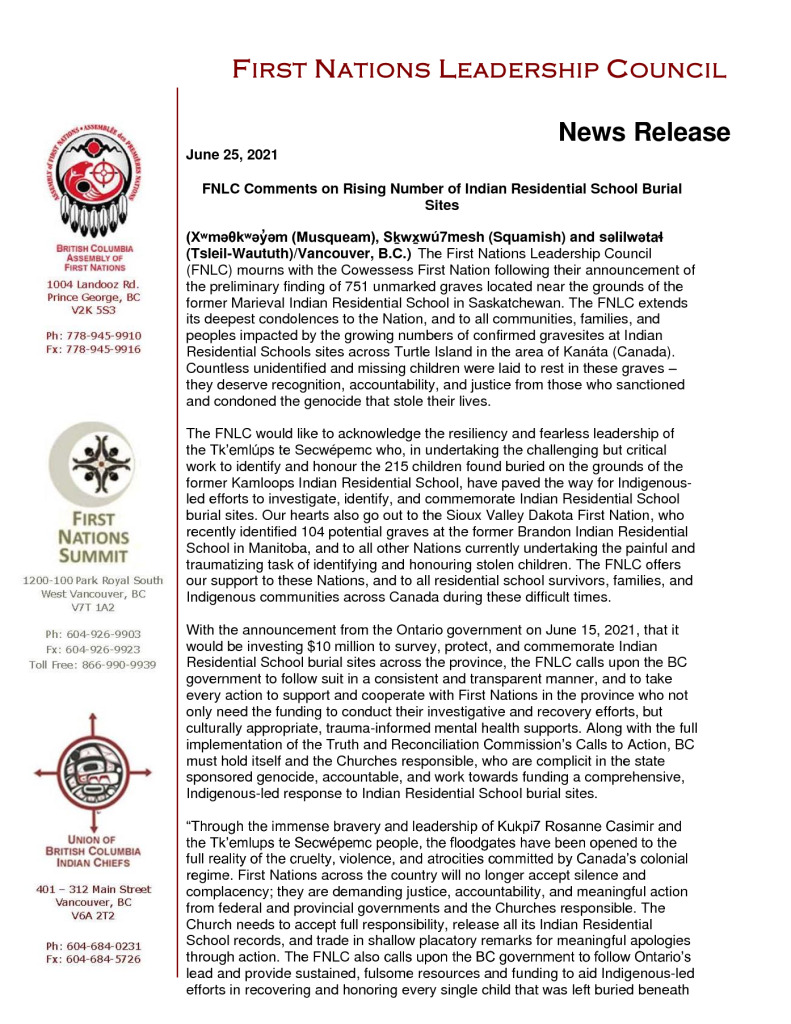 (Xʷməθkʷəy̓əm (Musqueam), Sḵwx̱wú7mesh (Squamish) and səlilwətaɬ (Tsleil-Waututh)/Vancouver, B.C.) The First Nations Leadership Council (FNLC) mourns with the Cowessess First Nation following their announcement of the preliminary finding of 751 unmarked graves located near the grounds of the former Marieval Indian Residential School in Saskatchewan. The FNLC extends its deepest condolences to the Nation, and to all communities, families, and peoples impacted by the growing numbers of confirmed gravesites at Indian Residential Schools sites across Turtle Island in the area of Kanáta (Canada). Countless unidentified and missing children were laid to rest in these graves – they deserve recognition, accountability, and justice from those who sanctioned and condoned the genocide that stole their lives.

The FNLC would like to acknowledge the resiliency and fearless leadership of the Tk’emlúps te Secwépemc who, in undertaking the challenging but critical work to identify and honour the 215 children found buried on the grounds of the former Kamloops Indian Residential School, have paved the way for Indigenous-led efforts to investigate, identify, and commemorate Indian Residential School burial sites. Our hearts also go out to the Sioux Valley Dakota First Nation, who recently identified 104 potential graves at the former Brandon Indian Residential School in Manitoba, and to all other Nations currently undertaking the painful and traumatizing task of identifying and honouring stolen children. The FNLC offers our support to these Nations, and to all residential school survivors, families, and Indigenous communities across Canada during these difficult times.

With the announcement from the Ontario government on June 15, 2021, that it would be investing $10 million to survey, protect, and commemorate Indian Residential School burial sites across the province, the FNLC calls upon the BC government to follow suit in a consistent and transparent manner, and to take every action to support and cooperate with First Nations in the province who not only need the funding to conduct their investigative and recovery efforts, but culturally appropriate, trauma-informed mental health supports. Along with the full implementation of the Truth and Reconciliation Commission’s Calls to Action, BC must hold itself and the Churches responsible, who are complicit in the state sponsored genocide, accountable, and work towards funding a comprehensive, Indigenous-led response to Indian Residential School burial sites.