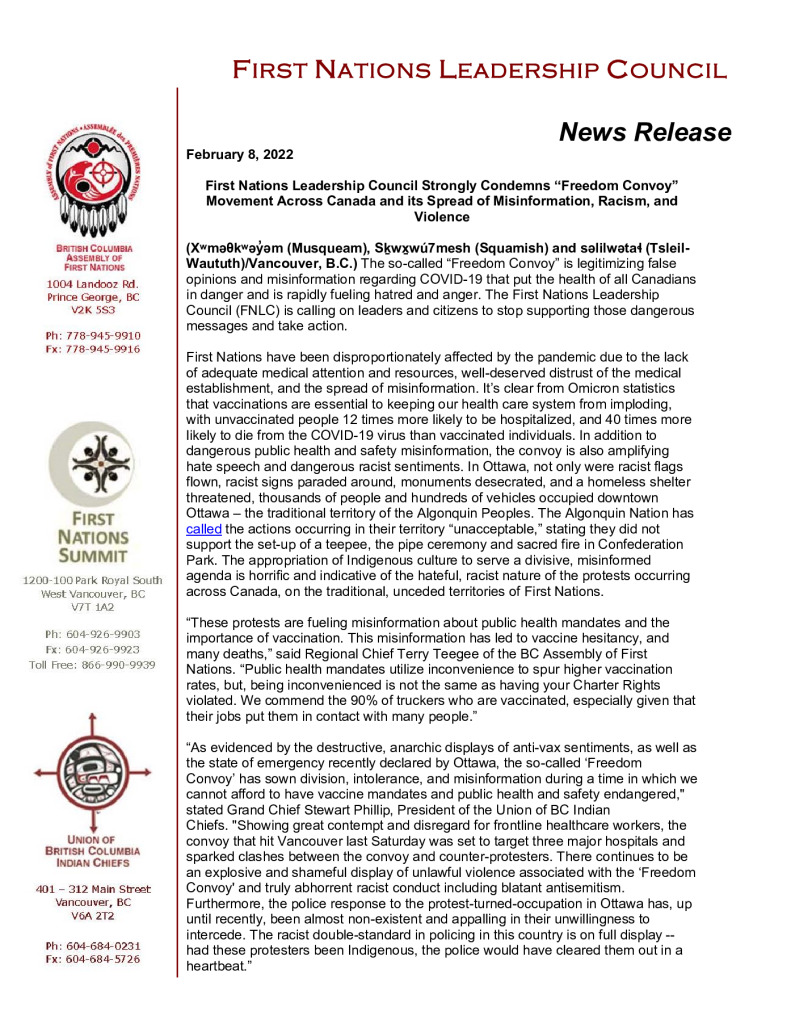 (Xʷməθkʷəy̓əm (Musqueam), Sḵwx̱wú7mesh (Squamish) and səlilwətaɬ (Tsleil-Waututh)/Vancouver, B.C.) The so-called “Freedom Convoy” is legitimizing false opinions and misinformation regarding COVID-19 that put the health of all Canadians in danger and is rapidly fueling hatred and anger. The First Nations Leadership Council (FNLC) is calling on leaders and citizens to stop supporting those dangerous messages and take action.

First Nations have been disproportionately affected by the pandemic due to the lack of adequate medical attention and resources, well-deserved distrust of the medical establishment, and the spread of misinformation. It’s clear from Omicron statistics that vaccinations are essential to keeping our health care system from imploding, with unvaccinated people 12 times more likely to be hospitalized, and 40 times more likely to die from the COVID-19 virus than vaccinated individuals. In addition to dangerous public health and safety misinformation, the convoy is also amplifying hate speech and dangerous racist sentiments. In Ottawa, not only were racist flags flown, racist signs paraded around, monuments desecrated, and a homeless shelter threatened, thousands of people and hundreds of vehicles occupied downtown Ottawa – the traditional territory of the Algonquin Peoples. The Algonquin Nation has called the actions occurring in their territory “unacceptable,” stating they did not support the set-up of a teepee, the pipe ceremony and sacred fire in Confederation Park. The appropriation of Indigenous culture to serve a divisive, misinformed agenda is horrific and indicative of the hateful, racist nature of the protests occurring across Canada, on the traditional, unceded territories of First Nations.