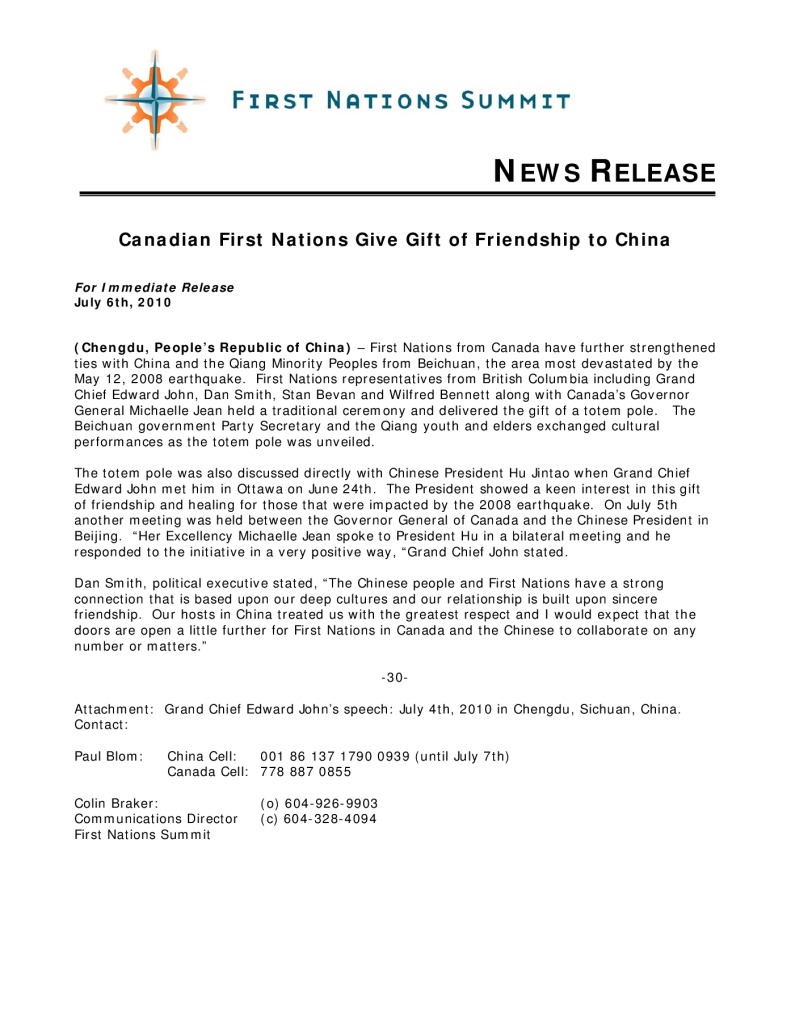 Canadian First Nations Give Gift of Friendship to China

(Chengdu, People’s Republic of China) – First Nations from Canada have further strengthened ties with China and the Qiang Minority Peoples from Beichuan, the area most devastated by the May 12, 2008 earthquake. First Nations representatives from British Columbia including Grand Chief Edward John, Dan Smith, Stan Bevan and Wilfred Bennett along with Canada’s Governor General Michaelle Jean held a traditional ceremony and delivered the gift of a totem pole. The Beichuan government Party Secretary and the Qiang youth and elders exchanged cultural performances as the totem pole was unveiled.

The totem pole was also discussed directly with Chinese President Hu Jintao when Grand Chief Edward John met him in Ottawa on June 24th. The President showed a keen interest in this gift of friendship and healing for those that were impacted by the 2008 earthquake. On July 5th another meeting was held between the Governor General of Canada and the Chinese President in Beijing. “Her Excellency Michaelle Jean spoke to President Hu in a bilateral meeting and he responded to the initiative in a very positive way, “Grand Chief John stated.

Dan Smith, political executive stated, “The Chinese people and First Nations have a strong connection that is based upon our deep cultures and our relationship is built upon sincere friendship. Our hosts in China treated us with the greatest respect and I would expect that the doors are open a little further for First Nations in Canada and the Chinese to collaborate on any number or matters.”