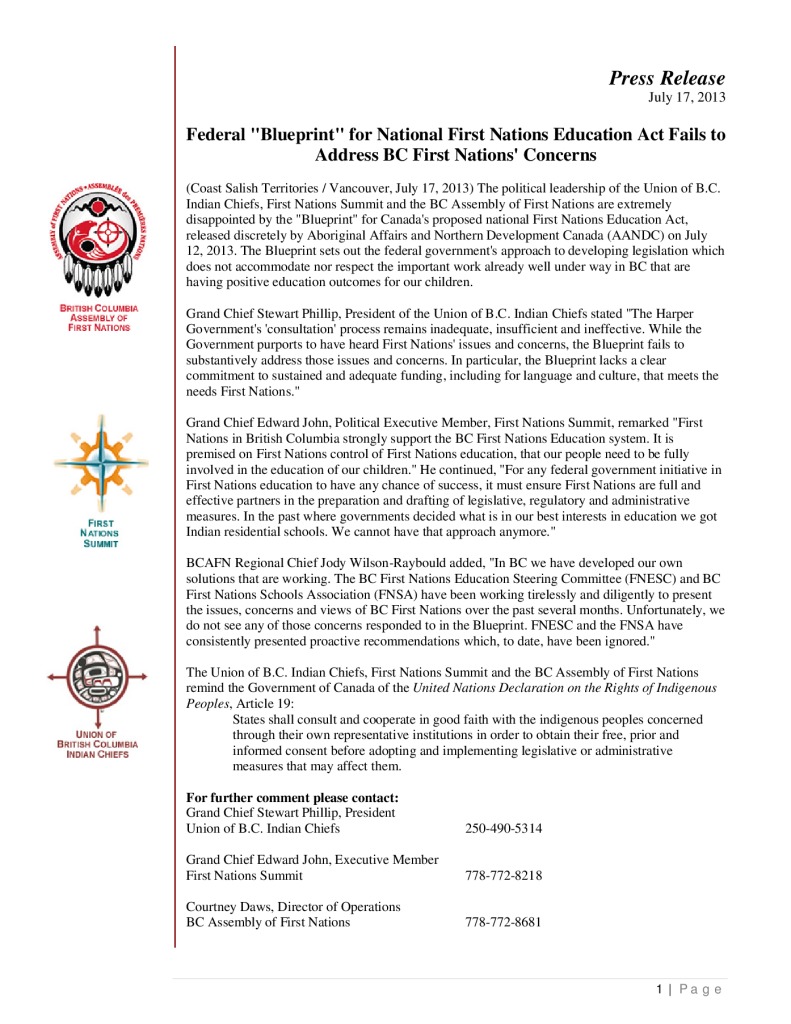 (Coast Salish Territories / Vancouver, July 17, 2013) The political leadership of the Union of B.C. Indian Chiefs, First Nations Summit and the BC Assembly of First Nations are extremely disappointed by the “Blueprint” for Canada’s proposed national First Nations Education Act, released discretely by Aboriginal Affairs and Northern Development Canada (AANDC) on July 12, 2013. The Blueprint sets out the federal government’s approach to developing legislation which does not accommodate nor respect the important work already well under way in BC that are having positive education outcomes for our children.

Grand Chief Stewart Phillip, President of the Union of B.C. Indian Chiefs stated “The Harper Government’s ‘consultation’ process remains inadequate, insufficient and ineffective. While the Government purports to have heard First Nations’ issues and concerns, the Blueprint fails to substantively address those issues and concerns. In particular, the Blueprint lacks a clear commitment to sustained and adequate funding, including for language and culture, that meets the needs First Nations.”

Grand Chief Edward John, Political Executive Member, First Nations Summit, remarked “First Nations in British Columbia strongly support the BC First Nations Education system. It is premised on First Nations control of First Nations education, that our people need to be fully involved in the education of our children.” He continued, “For any federal government initiative in First Nations education to have any chance of success, it must ensure First Nations are full and effective partners in the preparation and drafting of legislative, regulatory and administrative measures. In the past where governments decided what is in our best interests in education we got Indian residential schools. We cannot have that approach anymore.”